How Much Does It Cost To Live Full Time In An RV (Three Month Snapshot)? 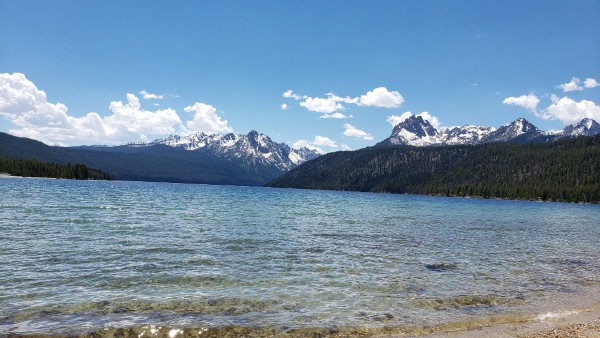 How can we afford to make this our temporary backyard?

Before setting out on this journey, we watched so many fulltime RVing YouTube channels on the subject of expenses. Let’s face it, the biggest question many have is “how much is it going to cost?”

If it can’t be done within one’s budget, what’s the point?

And one of my biggest questions before starting was “what will the first few months cost?”

Why did I ponder this question? For two reasons. First, if we dislike living fulltime in an RV, how much money will I lose?

And second, how much will all my “newbie” mistakes cost me before figuring out how to live inexpensively in an RV?

Let’s get the financial microscope out and explore our real costs for the first three months of fulltime RV living.

Our Perspective On The Costs Of Full Time RVing

For the first three months, fulltime RV living has cost us less than we originally thought. Before we sold everything and our business, our life was expensive.

So, I knew, no matter what, living fulltime on the road would cost less than we were used to. But there’s one large caveat in our situation. Our income diminished by 85%.

That’s a huge adjustment, so we had no choice but to be frugal.

What Was Our Initial Thought For Full Time RV Costs?

I’ll be honest, I budgeted more money a month than was necessary (3k). But that’s the business owner in me. And I’m extremely frugal (not that I had a choice).

I figured our three largest costs would be lodging, groceries and fuel. I was on the right track, but grossly overestimated one of the three listed.

Most individual’s initial thought on full time RV living is going from campground to campground. I quickly learned that we’re not fans of campgrounds.

They’re crowded and expensive. We are committed to boondocking on BLM and USFS lands. It costs nothing, offers more space and always has better views.

You can read more about our take on boondocking in our article: RYJ’s Take On Boondocking

I believe the grocery expenses for the first month were skewed. Since we stocked up on a lot of essentials before leaving, it saved us money on the road.

The rest were incidental expenses.

We moved every one to four days in the first month, so our fuel bill was expensive. But there’s one thing I have to point out. We were paying approximately $2.40 a gallon for diesel.

The current price I’m paying is between $3.40 and $3.99 a gallon for diesel. Adjusted for current fuel rates, that would have cost approximately $884 instead of $589.

The increase in fuel prices has had a real impact on the finances. So, make sure you budget accordingly. We regulated this expense by moving less frequently.

I totaled the first two months for this section. And that ended up being $4,502 for the two months.

Camping fees are now only totaling $140 over the two months. Not too bad since we’re learning to avoid paid campgrounds. 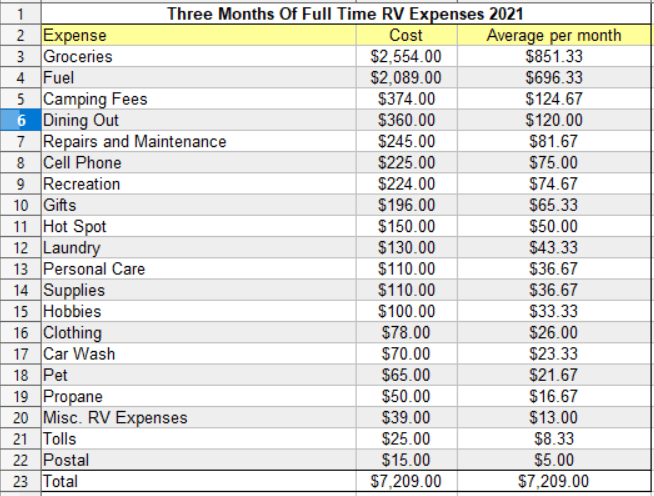 Now, let’s look at all three months combined. The grand total for the first three months of fulltime RV living was $7,209.

Here’s the exact numbers, so you have a good idea what you’re up against. Some of your fixed overhead will be different of course. Keep in mind, we have no debt.

And here’s the average per month we spent on each category.

This should give you a pretty good idea as to what your similar expenses could be. Make your adjustments as needed.

As We Progressed, We Learned How To Save

When you first hit the road, you’ll be in “vacation mode.” Be careful and make sure this doesn’t last too long. Remember, this is your potential new life now, not a vacation.

Eliminating the “vacation mode” mindset had a large impact on saving money for us.

We learned to slow down and not be in a rush. Besides, what’s the need to rush? Unless, of course you’re running from uncomfortable weather (or tornadoes).

We learned where to find inexpensive water, dump stations and fuel. We learned the art of boondocking.

And we learned how to find dispersed camping. All of this adds up. And it helps with the increased fuel prices as well as repairs experienced in later months.

What are the three biggest money saving tips? 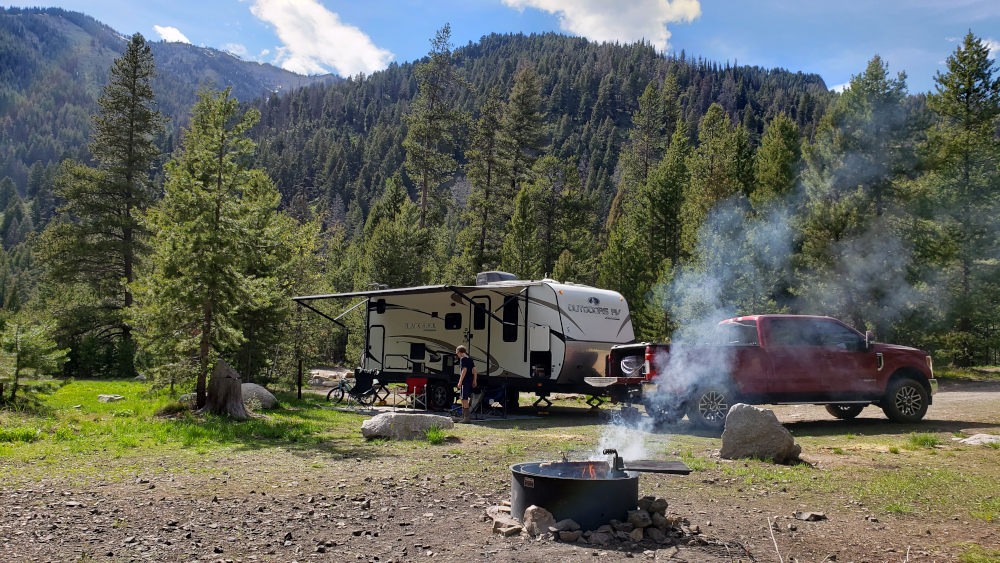 If you asked me before departing on YOUR journey how to save the most money, here’s what I’d tell you (in a nutshell).

It’s that simple. Those three things alone will have a global impact on your cost of living (for the better), period.

What Were The Biggest Expenses For The First Three Months Full Time?

As mentioned previously, groceries and fuel make up the bulk of our expenses. Since we do so many free activities, our entertainment contributes very little to our expenses.

And using an Interagency Park Pass makes it easy to use national parks for entertainment, dumping the rig and fresh water.

The next two largest expenses on the list were camping fees and dining out. And they were negligible compared to groceries and fuel.

I have to disclose that I lump dump stations and fresh water that I have to pay for into “camping fees.” But I think that’s fair.

Can You Save Money Living Full Time In An RV?

As I mentioned above, by boondocking consistently, we save a lot of money. We also do more “free activities.” This includes hiking, biking, beaches, museums, camp fires, National Parks (park pass) etc.

I often watched and read other full timers input on expenses and many stated that if you spent 4k a month in a “sticks and bricks” house, you’ll likely spend the same living an an RV.

I agree and disagree. If you’re objective is to save money, you’ll make the decisions to save money by learning the necessary methods.

We’ve met so many extraordinary people on the road who full time. Some live exuberantly and like to buy the latest solar upgrades. Read that as spend money.

But many have figured out how to live comfortably on as little as 1k a month for a single person. So, it can be done.

If you know that you’re only going to have a 2.5-3k a month budget and a little money in savings, just know, it can be done easily.

Of, proceed with caution if you have a lot of debt and are still making payments.

Being debt free is a game changer for this style of living. And let me just tell you how liberating it is!!!!

Are We Saving Money Full Timing?

You bet we are! I don’t even want to disclose how much we were spending a month on our house, maintenance, entertainment and living expenses. And we were still saving money!

I guess some would say that’s the “American dream.” I beg to differ. Being debt free and a free spirit is

I’m not saying it’s all rainbows and unicorns. We certainly have some hardships. Sometimes it’s difficult to find a data signal, a good spot to disperse, a dump station or water. But these are moot compared to many problems people experience.

In fact, as I write this we just wrapped up almost five days of a stomach bug. Dysentery in an RV sucks! But we managed. At least in a house, you can curl up in front of a TV. We don’t have one of those.

How Do You Save Money Living Full Time In An RV?

I mentioned above that the biggest three ways to save money living full time in an RV are:

I’m going to add one more way to spend less. Avoid remaining in “vacation mode.” It’s tougher than you think.

There are several great takeaways from this article.